Both Liam Cole, who plays Prince John, and Mikayla Stoodley, who plays Alice (sister of Maid Marion), are straight A students.  They hold doors open for people, ask others how they are doing and then wait patiently for a response. It’s plausible that in the last week they helped an elderly person cross the street.

But not on opening night.

It can’t be easy to make an audience laugh after cutting out someone’s tongue, as Cole does during the second act or connect with an audience while callously stepping over a corpse as Stoodley’s does. 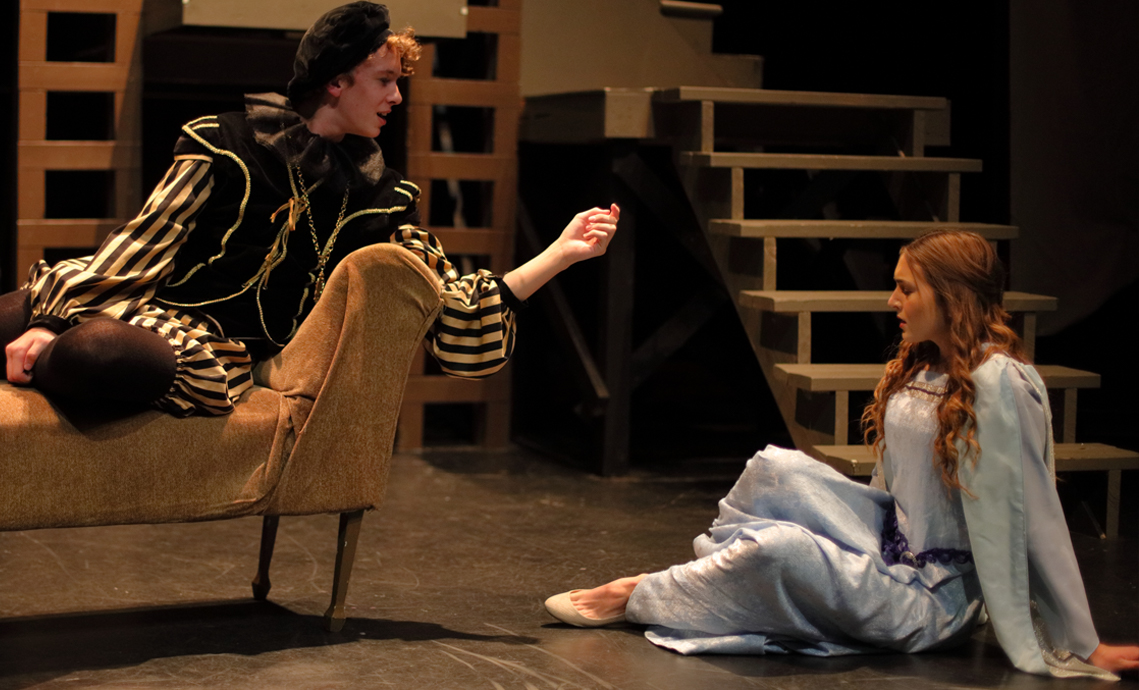 “To get into character I would have to find ways to make myself angry. Over time it became a lot easier just to jump into character.  I [also] found it helped to fully disconnect from myself in real life and the character I was playing. Understanding Prince John’s motives also helped me get into the scenes,” says Cole.

For Mikayla, getting into character also involved finding common ground with Alice.

“In order to get into character, you have to agree with your character. To fully embody them on stage you have to get into their mindset, which is weird when you are playing such a crazy character. I try to understand Alice’s point of view and not question her but rather understand her,” says Stoodley.

Ironically, it was Faith Dickinson, who played Marion, a character required to shift rapidly, between costumes, identity and gender, who in many ways had to change the least.  Dickinson is well known in the community for her philanthropy, and playing a character intent on seeing the often obscured good in others, at times, seemed like a reassertion of her actual identity.

“Marion because she is a strong and independent woman who takes matters into her own hands. She must go through difficult struggles in order to find herself and love. She is faced with challenges and fights as hard as she can for what she believes is right,” says Dickinson. 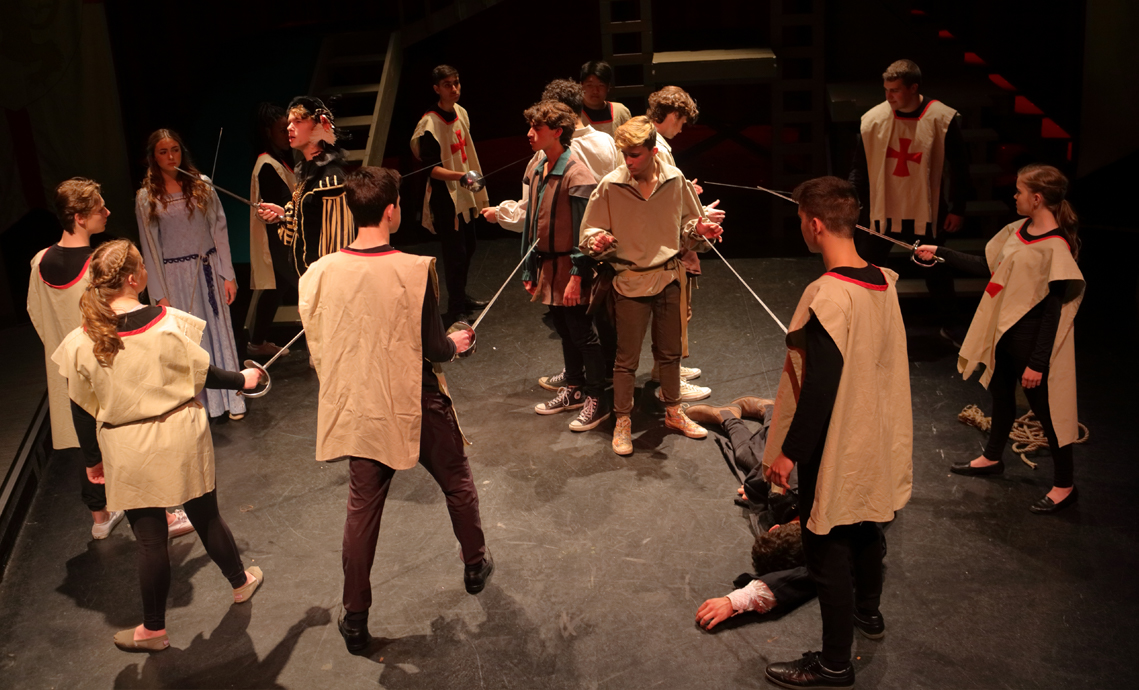 At its core, The Heart of Robin Hood is a story about transformation and its modern interpretation does not shy away from violence.  Robin Hood, often quite literally, pulls no punches and right from the first scene where Robin Hood executes a corrupt priest it becomes clear that little blood will be spared.  Initially, while Robin Hood certainly robs from the rich he does not give to the poor, but instead distributes appropriated gold to his band of merry men who have not only sworn an oath of fealty to him but also agreed not to allow any women into either their band or their lives.  Women, according to Robin Hood, distract from their agenda. Consequently, the character of Robin Hood is initially cast in a morally dubious light; a reading that is perhaps much closer to the historical truth than more mainstream interpretations. This accord is undermined when he robs Maid Marian and her servant Pierre, played by Liam Davidson. This chance encounter causes Robin Hood to begin questioning the principles that have thus far driven his life.  In The Heart of Robin Hood, love redeems and ambition destroys and all characters are transformed by both.

But like all plays at Lakefield, the real transformation occurred long before opening night.  For Liam Davidson, playing the comic foil, Pierre, his superb comic timing was the product of years honing his craft.

“I trained for eight years under actress Linda Kash. I took improv lessons from her and learned the intricacies of comedy,” says Davidson,

For play lead, Santiago Paz, accepting the role was a leap of faith.

“I was very surprised, confused and a little scared [when I got the role]. I didn’t think that I was the right choice for the character since I had never acted before, I was also hesitant to take the role because I was planning on doing track and field along with the play,” says Paz.

What Paz missed in track and field was more than offset by countless hours of swordplay under the professional instruction of Jamie Treschak, co-owner of Violence in Motion.  Using the special forces ethos of, “use it or lose it,” actors also practiced an additional 30 minutes before each performance in order to stay focused and even then, stage fighting was always fraught with actual danger.

“You basically have to execute three movements right.  If you miss one or two you’re still ok but then sometimes everything fails at once,” says one of three directors, Dayna Taylor.  And while no one was hurt during rehearsal or the performance, even prop swords, daggers and fists can leave a mark. 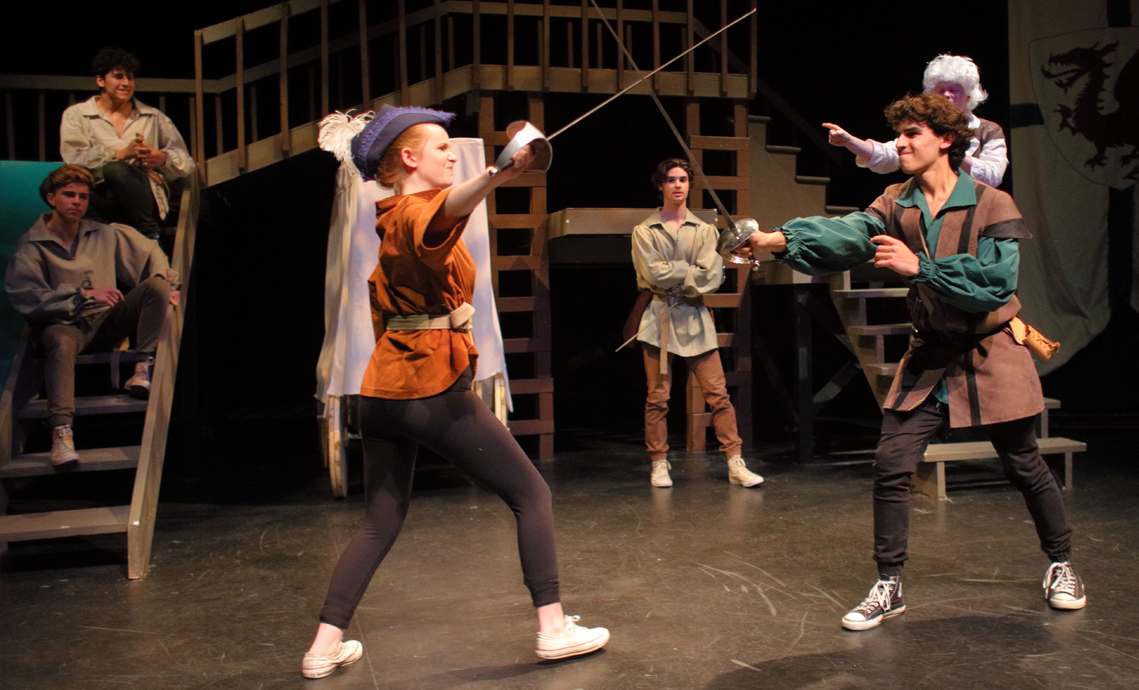 Experience also leaves an indelible mark and a play isn’t just a way to entertain people for two hours. It’s not about memorizing lines but feeling them.  It’s not about timing or rote movement but practicing so much that it doesn’t look like you practiced.  At its core the play is an invocation to say, “yes.”

“When I was offered the role I could only think of Nick Latimer’s chapel speech, he talked about doing things so as not to regret missing out later. I agreed to take the role because of Lakefield’s motto of pushing yourself outside your comfort zone,” says Paz

In The Heart of Robin Hood, characters are uplifted by love and destroyed by ambition but for the actors, the tech crew and the directors it is as much about the performance as it is about aligning with Eleanor Roosevelt’s challenge and doing what you think you cannot.