Deepening our connection with, and responsibility to, nature and the outdoors through beekeeping.

On a warm day in early June, three students at Lakefield College School pull on long-sleeved white coveralls and plunk veiled hoods over their heads. Then they carefully tuck leather gloves under elasticized cuffs. Looking more like emergency responders in hazmat suits than high school students, they turn to the leader of this oddly dressed group.

Garret Hart, Head of Cooper House and Outdoor Education Assistant, is giving the students a hands-on lesson in one of Lakefield’s latest outdoor pursuits: beekeeping.

Hart is well known for coordinating The Grove’s maple syrup production every year. Many in the community covet the delicious product he and his students create each spring from the sugar maples on campus. Beekeeping is a fairly new endeavour at the school, and you can tell from the way he talks about the bees that Hart is passionate about the project.

“We think of ourselves as stewards of the bees, not farmers. The most important lesson we want students to take away is how they can help these impressive creatures thrive. We want them to understand what’s causing the catastrophic colony collapse of honeybees in North America, and how we, as humans, impact their environment. Collecting honey is great, but it’s only a part of the learning experience.”

In 2017 Lakefield acquired five honey bee hives. As with maple syrup production, the school wanted to give students the opportunity to manage the production of a sustainable resource. Working under Hart’s watchful eye, students learn to take ownership of the process and to enjoy the satisfaction of creating a valuable product. Along the way, they also learn the myriad aspects involved in maple syrup or honey production, from good stewardship of trees or bees, to biological and chemical facts about these amazing resources, to the procedures required to harvest sap or honey. And of course, all the learning takes place outdoors—which is classic Lakefield.

The five whimsically painted hives sit like odd-looking dressers in the middle of a clearing far to the north of Harris Field. It takes several minutes to drive a golf cart over hills and through a forest to reach the clearing, so there is no chance someone could accidentally stumble across the hives. Which is a good thing, because they’re surrounded by an electric fence. As everyone knows, bears love honey. The electric fence makes ursine marauders think twice about exploiting these honey troves.

On this beautiful June day, Hart and his suited-up team let themselves into the enclosure, and not one of them seems nervous. Hart is bare-handed. As he shows the students how to remove the lid from a hive, first smoking the bees to calm them down, he is utterly nonchalant about the hundreds of buzzing bees revealed underneath. “Honeybees aren’t interested in stinging you unless they feel threatened,” Hart explains. “They have a lot of work to do. As long as you stay calm and don’t scare them, they’re not interested in you.”

The students take him at his word and happily help remove a frame that is covered in bees. Beneath the bees is a matrix of hexagonal cells that form the honeycomb, which the bees created themselves with a wax they produce in their glands. Worker bees chew the exuded wax until it’s the right consistency to construct the honeycomb. They also gather resin from pine trees, mix it with their wax and saliva, and use that compound (called propolis) to completely seal the hive. Not a gap is left. The students are awed by the intricacy of the structure and Hart explains that it is even more complex and extraordinary than it appears.

“In every hive there are about 50,000 bees. Most of them are worker bees—females that don’t produce fertilized eggs—and they do all the gathering of nectar, pollen and resin; all the construction of the hive; all the care and feeding of the queen, drones and larvae; all the cleaning of waste; and all the defence for the hive. There is only one queen per hive and her sole job is to lay eggs and place them in cells. There are also a few hundred male drones, whose only job is to fertilize the queen.

“The worker bees not only build the honeycomb, they do it to precise measurements. And they don’t deviate from those measurements. Then the queen lays her eggs and puts them in cells at the centre of the honeycomb, while the workers fill the surrounding cells with bee food: pollen and nectar. When the nectar is at 17% moisture it becomes honey and the bees cap the cell to preserve it. Everything these tiny creatures do has a purpose.” 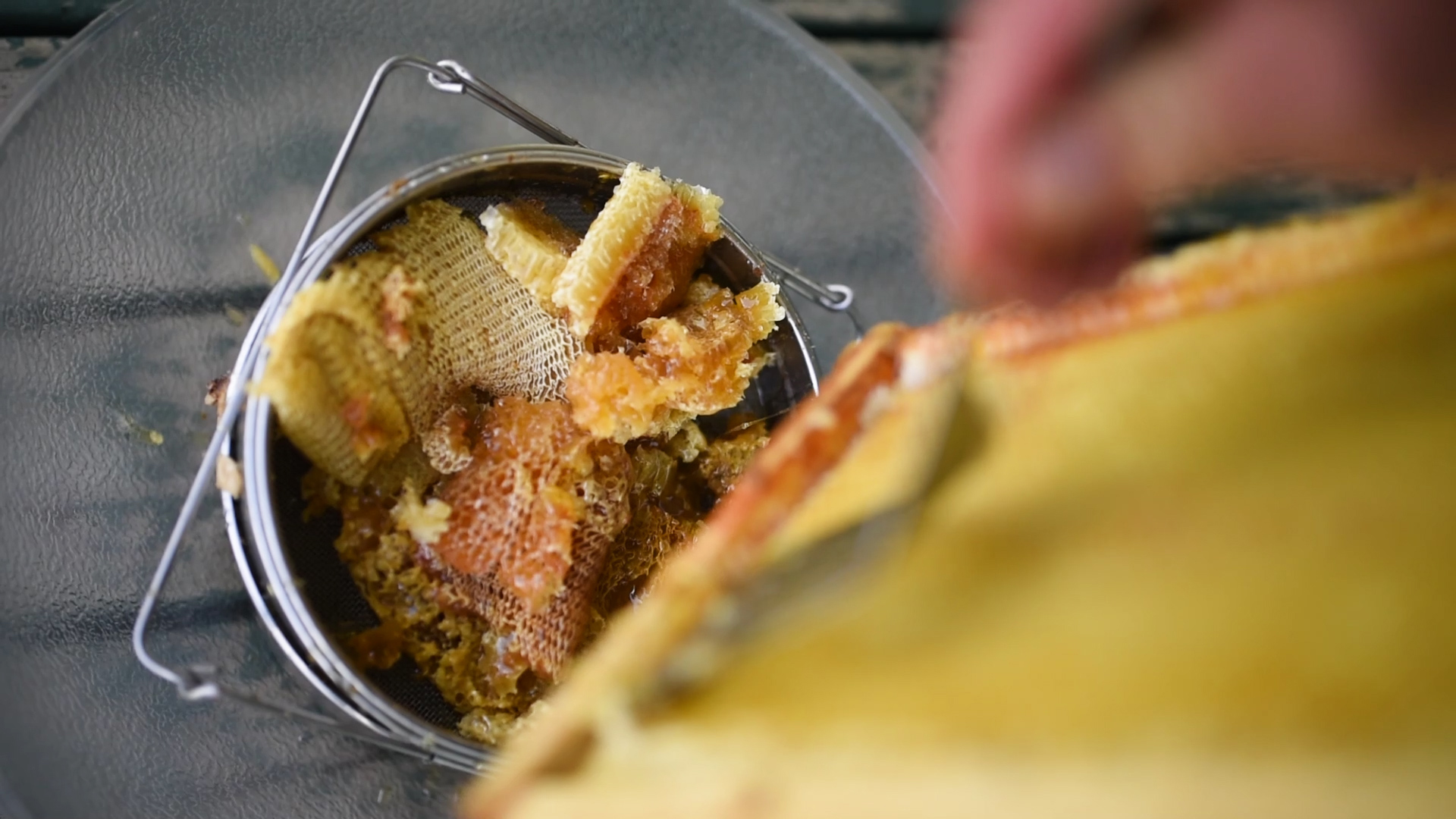 The team looks excitedly for the queen (she is much larger than all the other bees, with a long extended abdomen) but she’s staying out of sight today. Hart suggests the students put a drop of honey on a gloved finger, then gives each of them a bee. They’re able to examine the insects up close as the bees love the honey—and some even dance!

There is no doubt the students have been entranced by everything they’ve observed, heard and done today. They seem to be both proud of themselves and humbled by the experience. One boy asks Hart if he thinks the bees know they’re being taken care of.

“I hope so,” Hart answers thoughtfully. “I talk to them all the time. I hope they understand we care about them.”

As the students help him put back the frames, being mindful not to hurt or step on any of the insects, it’s abundantly clear: they do care about the bees. The honey will just be a well-earned reward.